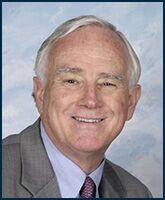 David's practice includes all aspects of litigation of high exposure and complex cases in the areas on construction accidents, construction defect, product liability, premises liability and commercial automobile cases. David has extensive trial experience in both state and federal courts.

David obtained his B.A. in Business Administration from California State University, Fullerton in 1970. He then attended law and obtained his J.D. from Southwestern University of Law in 1977 where he received the American Jurisprudence Award. He is a member of several Bar Associations and is admitted to practice law in all California State Courts and the United States District Court – Central and Southern Districts, and the Ninth Circuit Court of Appeals and the U.S. Supreme Court. David was a prior director with Association of Southern California Defense counsel for 10 years and was a State representative with the Defense Research Institute for several years.

David has been married to his wife, Mechele for 51 years. The have one son, and several grandchildren. David’s hobbies include golf, skiing and traveling with his wife.